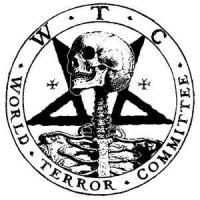 W.T.C. PRODUCTIONS is proud to present a brand-new mini-album from German black metal cult PARIA, entitled Knochenkamp. Since the ancient year of 1995, PARIA have been a study in staunch defiance and unparalleled filth. Their late '90s era was spent brewing disgusting demos in secret, and then during the early 2000s, a handful of official demos emerged from PARIA's dungeon, perhaps best characterized by the 2007 compilation title Paria über alles - 11 Years of Blood, Cum & Satan. Two full-lengths would be released, 2008's VerminRace and 2010's Unchain the Unclean, before the band's breakout album, 2013's Surrealist Satanist. Released by W.T.C. to international acclaim, Surrealist Satanist was the culmination of nearly 20 years of mounting mental instability and restless demons knocking on their door: PARIA had finally arrived, exploding with dizzying disease and roiling chaos, and yet somehow wrangled it all into palpable but no-less-bent shapes with frightening finesse.

Alas, PARIA have returned to build further on that monument - or bury it under garbage and gangrene - with Knochenkamp. A fountain of filth and fury, cutting and concise whilst exuding a substantial totality at 28 minutes, Knochenkamp is PARIA at their most untamed and unbound: untamed in how bloody spiraling and dangerously caustic their attack has become, and unbound in that they pay little to no mind what's been committed to tradition under the banner of "black metal." Over the course of four songs and intro, the quartet weave bewitching spells of black metal classicism that soon split apart at the seams and become consumed by a ravenous insanity that literally feels dangerous - there's no faking this sort of instability. And yet, their songwriting acumen is at peak performance, as Knochenkamp's component parts are ones that go places, beckoning the listener ever onward, teasing with morbid repose before whipping forth into a abyss-ward tornado of utter disgust and bitter, black hatred. Through it all, PARIA remain gleefully possessed, almost taunting that listener with demonic delight. Will you have the spiritual/physical fortitude for Knochenkamp?